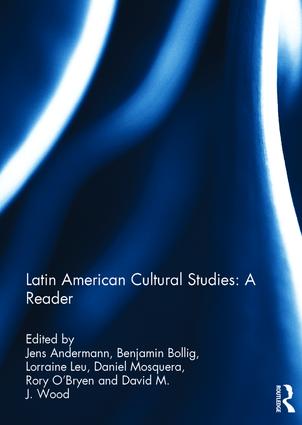 The present Reader, celebrating twenty-five years of the Journal of Latin American Cultural Studies, is also a first attempt to re-chart the map of the field with a view to these new challenges. Rather than once more to document key moments and polemics from the past – a task that previous anthologies such as those by Del Sarto, Ríos and Trigo  (2004) and more recently Szurmuk and McKee Irwin (2009) have already fulfilled remarkably well – we have asked for the ongoing or renewed validity of the questions and issues raised in the Journal’s pages. Readers might be surprised at first sight by the absence of key names in the field whose work the Journal has accompanied and published over the years (Jesús Martín-Barbero, Josefina Ludmer, Néstor García Canclini or Silviano Santiago may come to mind) and the presence of others whose work, while in conversation with it, has not necessarily been identified with Latin American cultural studies but rather with art history, anthropology or even literary writing. No judgment of quality or critical value is intended here, merely the suggestion that, twenty-five years onward from the Journal’s foundation, the question of what cultural studies needs to be and of what might be specifically Latin American about them, is perhaps not as settled as some of its resident curators and gravediggers might think. Rather than a museum of Latin American cultural studies, this collection wants to offer something like an open archive and therefore an invitation to read anew. Its six thematic areas provide cross-sections, each in its own fashion, through concerns and controversies that have run through the Journal’s pages, yet which also acquire a new urgency in the light of present critical and political challenges. (From the Introduction)

To browse the table of contents, and to buy from Routledge, click here.